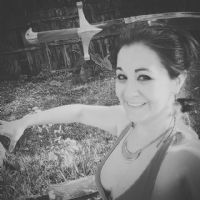 Tabitha has over a decade of belly dance experience and has performed at haflas, charity events and street performances. Originally from Ft. Myers, Florida, she has studied under Sherry Coffey, Misha Cain Nell, Alina Yllanes and Paulette Reese-Denise. She has also engaged in home study of Datura Style. Prior to her belly dance focus, Tabitha had training in jazz, tap, theatrical technique and puppetry and graduated from an arts high school as a vocal major.