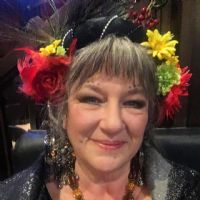 Kathleen has been a Shimmy Mob Team Leader since 2013 and has been teaching belly dance in Central Alberta since 2003. She is also the founder of Peace Grove and Nemetona, an annual women's retreat that focuses on creativity, spirituality, empowerment, collaboration and connections between women. Twitter: @jinglebutt