The Shimmy Mob 10th Anniversary Summit will take place September 25-27 in Vancouver, BC (Canada), where Shimmy Mob started. Vancouver is considered one of the most beautiful cities in the world. If you have never visited it before, we strongly recommend spending a few extra days here to explore even more. You won't regret it.

Come meet and dance with participants from different teams around the world and celebrate Shimmy Mob's 10th Anniversary together at Headquarters! Three full, fun-filled days of activities, workshops, panels and presentations, plus the opportunity to dance and be part of the official 10th anniversary celebration flash mob (with a special choreography).

Vancouver has an extensive transit system frequented by hundreds of thousands of tourists every year; getting around is easy and very affordable and fun (don't leave without taking the SeaBus).

So be sure to book early to reserve your spot and take advantage of the early bird rates. Accompanying spouse is free. Contact headquarters at +1 604 722 9545 to confirm. In addition, there are special discounted prices for participants registered for the May 9, 2020 Shimmy Mob event.

(Accomodations, transportation and meals are not included.)

Please plan to arrive by Thursday evening (September 24th) so that you don't miss a minute of this amazing event.

The 10th anniversary summit finale flashmob will take place in downtown Vancouver late Sunday morning (September 27th). We expect the event to be over by 1 PM. As international flights require you to be at the airport three hours prior to departure, please give yourself ample time to be in the flashmob by booking your return flight to depart after 4 PM. If you are staying longer and want to explore, hang around for a casual group lunch and then join Sabeya in doing some sightseeing in Vancouver.

The 2020 Shimmy Mob Summit is being held at this hotel:

Should you wish to book a room at the summit hotel, mention the code "Shimmy Mob Summit" for the special group rate ($199 CAD). This special rate was negotiated for rooms with double beds (up to four people per room). The number of rooms at this rate is limited and there is a deadline for this offer. Please reserve early to ensure your accommodation on site. 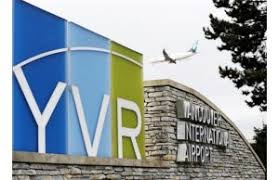 Getting from the airport to the site hotel

There are a couple of options:

Traveling alone or with others

While the Skytrain may be the more cost-effective option, it is slower, as you will need to change trains at the halfway point in downtown Vancouver. It's an easy commute, however, if you travel light and don't have more than what you can carry. The Skytrain stop closest to the hotel is "New Westminster" and it's a 5-min walk to the Summit site hotel.

If you are traveling or meeting up with other participants at arrival, sharing a Taxi, Uber or Lyft ride may be more economical (as well as much quicker).

What to know about customs

You need a valid passport to enter Canada. You may be required to obtain a visitor's visa; please verify this here.

Whether you have a Canadian passport or not, please be advised that some items that may be legal where you live, may not be legal to bring into Canada. Learn more here.